Today’s helping features the story of when the Sun Ra Arkestra descended from the mothership onto an unsuspecting Marbella Jazz Festival. 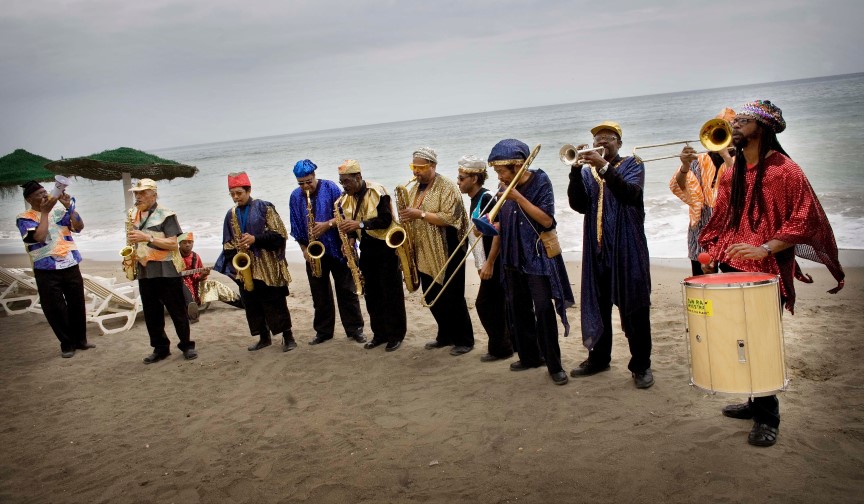 The Marbella years were never short of drama, the visit of the Sun Ra Arkestra to Marbella, suddenly, on the eve of the festival, for instance. Their European tour was organised by Gaby Kleinschmidt, a long respected German agent from Freiburg. Gaby was to have had the 11-piece Arkestra playing one-nighters through Germany for ten days before they went into a club in Rome for a week, then flying into Marbella to finish the tour on the Saturday. However, as they started their German tour, Gaby heard from Rome that the nightclub was cancelling. If that sounds outrageous, that’s exactly what it is. Fortunately this sort of thing rarely happens, but, when it does, it’s devastating.

Who is going to pay the band’s salary for that week or reimburse the cost of flights for the legs Stuttgart to Rome to Malaga, who is going to feed them and, most importantly, where are they going to stay for a week? Most of these questions were, I’m sure, put later into the hands of Gaby’s lawyer, but she came up with a nifty plan to take care of the immediate problems.

She asked me if I could arrange for the band to be looked after in Marbella for three days instead of the scheduled one while she accommodated them in her house for the remaining days – now that must have been some wild experience! To ease the burden on Marbella, Gaby assured me that the group would do all they could to help promote the event over those days. I took all of five seconds to agree. What a blast to have the Sun Ra Arkestra around and at a loose end for a few days, a rare and very welcome opportunity!

The first problem, to find accommodation and meals, was easily solved. I cancelled the 11 single rooms for one night at the 5-star Guadalpin and re-booked five twin rooms and one single at my regular Marbella hotel, the far more modest 3-star El Faro. The savings from the Guadalpin covered the entire stay at El Faro. Next I put the arm on the jazz-loving owners of two festival venues, telling them how cool it would be to have the Sun Ra Arkestra eating and conversing in their bars. I arranged a press photo-call on the beach which was a riot. The band played, simply because they wanted to, for an hour, a crowd gathered, dancing broke out and the subsequent photographs appeared like a rash all over the Andalucia media. It was even picked up on television and aired that evening.

Come the night of the concert and I figured that by then I had become pretty much accepted as one of the gang. Pre-show, sitting in the dressing room, ready to go on stage, just waiting for the end of the intolerably lengthy speeches by local politicians, they unexpectedly asked me to leave the room which I did, albeit a little grudgingly. As I left, I saw them all gathering in a circle to pray. I lurked outside the dressing room, waiting for the cue from the radio producer that the speeches were about to end and the band should make their way to side stage.

Suddenly the dressing room door burst open: the prayers had now been replaced with a strange chant and the line of musicians began dancing their way towards me. I quickly decided to let things roll as, quite frankly, I might as well have tried to stop an advance by the entire Sioux Nation. It was beautiful: suddenly the pontificating politicians were surrounded by a chanting, strangely attired mob of musicians, live on radio. They did the only thing possible in the circumstances, they slunk off into the night, leaving the stage to one of the most original of jazz attractions to deliver a tremendous live broadcast with three encores for which the broadcaster, wisely, stayed on air.

I was sorry to have to wave them off to Malaga Airport the next day. It had been such an enlightening experience having them around. To a man they were co-operative, helpful and patient beyond belief, posing for photographs wherever they went and for an hour after the show. The Sun Ra Arkestra don’t always get the acknowledgement they deserve from the Jazz Mafia. One thing is certain, they are all fine musicians; the orchestrations are not straightforward, but the discipline is there and they play them impeccably. Maybe some folk shy away, put off by the nutty background story that was circulated when they first came to notice. Perhaps some were discouraged by Sun Ra’s assertion that he was not born on this planet, but came from Saturn, and some media comment, true or not, that there is no record of his birth anywhere in the United States. Maybe not, but they should really be checking out pianist Herman ‘Sonny’ Blount who recorded with Wynonie Harris and played with such luminaries as Fletcher Henderson and Coleman Hawkins before changing his name and forming the Arkestra.

Sun Ra died in 1993 and, when his successor, Arkestra stalwart John Gilmore, also died, founder member Marshall Allen assumed the leadership of the Arkestra, a task which, in 2018, he is still doing in exemplary fashion at the age of 94.